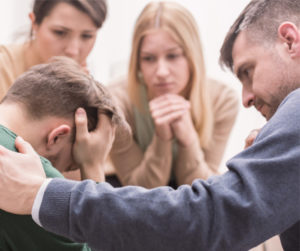 This article is by Samantha Campbell and published by Recovery Connection

In my family, addiction is as commonplace as dishes in the sink or Sunday dinners. It’s in the way I was raised, the way my parents were raised. I don’t have anyone in my family who lives in active addiction right now, but I can see its effect across generations. Cyclical destruction occurs, and once it is stopped, it can take decades to rebuild.

There are two things I know about my paternal grandmother, but neither of which is her name. I know she died a few years ago, and I know she abandoned my father and his siblings when they were young children to nurse a drug and alcohol habit, which would eventually take me back to the only other thing I know about her.

There are many things I know about my paternal grandfather. I know the way Papa likes his coffee and how he felt no greater joy in life than being surrounded by his grandchildren. I can hear the hiss of his portable oxygen machine if I close my eyes and concentrate hard enough. I can feel his too-thin arms around me, his spindly fingers resting on my back. It’s hard to reconcile the man I knew with the absent-alcoholic-chain smoker my family knew. I always knew my dad was angry about his mom, but he never said anything. He made sure I never came face-to-face with his dad the alcoholic, but rather only experienced my warm, loving Papa.

The only time my dad talked to me about what his life was like growing up was when he was sending me into my first ever therapy appointment. We were sitting in the cab of his pickup truck when he looked at me and said he had made a mistake and didn’t have everything he needed to be a parent.

He wanted me to learn how to deal with my life so I could have better and be better than all those who came before me, including him – I didn’t listen to him.

Within 18 months of that conversation, my father and I had stopped talking completely. My parents had been divorced for years, but he stopped coming around and I stopped expecting him to. At this point in both of our lives, we were struggling pretty severely with mental health issues, unable to cope in a way that was healthy and productive.

There are parts of my life I never considered a byproduct of this disease we know as addiction before today, but when they are all laid out, it makes sense. My dad was unable to be the father I needed when I was a teenager because he didn’t have one. Alcoholism made sure he didn’t have one until after my dad was an adult with kids of his own. He never saw good parenting in action until after he’d already had me.

I decided I won’t let addiction take anything else from my family or me. I’ve found a support system in Al-Anon and other groups, and have advocated their importance to everyone I know. Even if it’s just once, there’s healing in being surrounded by people who understand and listening to their stories.