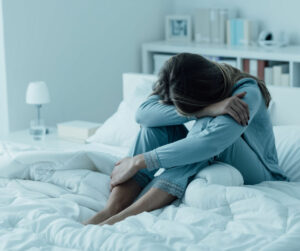 While depression may seem like a modern illness that has recently become more of a public topic of discussion, it’s existed since the beginning of time.

For as long as people have been able to feel hurt or sorrow, depression has existed. This complex disease has affected many people, both in the past and in the present. As a Christian rehab in Florida, we’re familiar with the presence of addiction and mental illnesses like depression in the Bible. We’re sharing what we found when taking a deeper look at depression in the Bible and some examples of people in Scripture who experienced this mental disorder.

People in the Bible With Depression

From Kings to the average Joe, below is a handful of people in the Bible who experienced depression.

David was anointed King of Israel in his teens but didn’t officially take up his throne until he was 30. Whether you’ve read the Bible or haven’t, you may have heard of David’s battle against Goliath, a Philistinian man known for his size and strength. One of David’s most well-known battles was against Goliath, who he defeated by flinging a stone at his head with a slingshot. The young man’s courage against the Philistines distinguished him as a warrior in King Saul’s court and eventually roused the king’s jealousy. Soon after, a plot to kill David was formed.

David ran from King Saul as an outlaw with a price on his head for nearly 15 years. He eventually became the leader and organizer of groups of outlaws and refugees who eagerly awaited the day he’d take the throne. While on the run, David won the hearts of the Judean people by protecting them from bandits and other dangers. After Saul’s death, David officially became king.

Gaining a new title, however, didn’t mean his problems were solved. The book of Psalms is one of the most popular books of the Bible and is attributed to David and his life. Below are some verses in Psalms that describe the fear, anguish, and depression David experienced during his hiding and reign.

These are only some of the many verses David wrote about the depression he experienced while on the run and during his time as king. However, as heartbroken as he was, David knew that he could always count on God. The hope in, faith in, and love for God that David and other Bible characters who experienced depression shared is why we utilized Bible studies in faith-based drug rehabilitation programs.

The prophet Elijah is known for his role in protecting Israel from the corruption of the worship of Baal. The King of Israel at the time, Omri, had allied himself with the Phoenician cities of the North, and his son Ahab married a woman named Jezebel. Infamous for her wickedness towards Israel, Jezebel’s known as the archetype of the wicked woman due to her disregard of the rights of the common Israeli people and her defiance of the prophets Elijah and Elisha.

Jezebel replaced God with her worship of Baal by building a sanctuary or temple in Samaria. This meant that the Israelites had to accept both Baal and God, which goes against the latter’s commandments. Elijah proclaimed Israel’s punishment due to their worship of Baal and proved his authority in God by winning a test against 450 prophets of Baal, which ended the drought that had begun in the region as punishment.

However, despite God’s work through Elijah and the many miracles the prophet personally witnessed and played a role in, he fled in fear of Jezebel. When he made it to Judah, the prophet sat under a broom bush and prayed that he might die: “He came to a broom bush, sat down under it and prayed that he might die. ‘I have had enough, Lord,’ he said. ‘Take my life; I am no better than my ancestors.’ Then he lay down under the bush and fell asleep.” As you can see here, Elijah hit a point of emotional and physical exhaustion, both of which are common symptoms of depression. But as with David, God heard Elijah and answered him. Elijah was directed to eat and drink so he could travel to complete God’s plan for him. Because of his obedience and faith, God took Elijah in a windstorm, making him one of the two people (the other was Moses) who ascended into heaven instead of dying a normal death.

Many people think of Job when they talk about depression and the Bible. Job (pronounced “Jobe”) is the oldest book in the Bible. The story of Job starts with a faithful man of God who lost everything. He lost his home, kids, job, and health, and he was eventually left with three misleading friends. So great was Job’s suffering that, “His wife said to him, “Are you still maintaining your integrity? Curse God and die!”(Job 2:9). Although Job maintained his faith in God, he went through a period of great depression and confusion. Some verses that display Job’s pain include:

You related to Job and his feelings of constant sadness and hopelessness. You may wonder whether things will ever get better, but they will. Through all of his self-loathing and depression, God eventually speaks directly to Job. Throughout his previous trials, Job remained faithful and refused to place the blame on God for all of his hardships. But eventually, it became too much for him, and he did point the finger at God. When the Lord saw the turmoil Job was in, He answered Job’s questions and admonished his behavior. Job repented, and because of his great faith, God blessed the latter half of Job’s life with plenty of cattle, family, and a new home.

Jeremiah was another major prophet who experienced a lifelong battle with sadness and even wrote an entire book about his sorrows called Lamentations. In chapter 2, verse 11, he wrote, “My eyes fail from weeping, I am in torment within; my heart is poured out on the ground…” As many people with depression have felt, Jeremiah felt rejected and ignored by God, writing, “He has made my skin and my flesh grow old and has broken my bones. He has besieged me and surrounded me with bitterness and hardship. He has made me dwell in darkness like those long dead” (Lamentations 3:4-6).

You may relate to Jeremiah if you’ve ever thought, “God doesn’t hear me” or “I have no tears left to cry.” The people we read about in the Bible weren’t immune to the hardships many of us face, but with God’s guidance and care, they recovered.

What Does the Bible Say About Depression?

Depression (major depressive disorder) is a mental illness that negatively affects how a person thinks, feels, and acts. Common symptoms of depression include severe sadness, feelings of emptiness and worthlessness, and loss of interest in activities that were once enjoyable. Although depression is a mental disorder, it can also impact a person’s physical health. People with depression who do not receive mental health treatment often experience physical changes like extreme weight loss or weight gain and unexplainable pains. It’s also common for people with mental illnesses like depression to turn to drugs and alcohol as a coping mechanism. Our Christian inpatient drug treatment program has helped many patients who engaged in substance abuse to self-medicate and deal with other problems.

Though the word “depression” is only mentioned a few times in the Bible, it’s often referenced by other common words in Scripture, like “downcast,” “brokenhearted,” “troubled,” “miserable,” “despairing,” “mourning,” and more. The Bible talks about depression often, and there are numerous stories about faithful and influential people who suffered dark times and afflictions like depression. Below are some examples of what the Bible says about depression and verses for depression that can help you or a loved one stay strong amid hardship.

While many people have varying opinions on mental health in the Bible, you don’t have to go through mental illness alone. Not getting the help you need can lead to more serious and self-destructive attempts to cope, like substance abuse. Many people with mental disorders become reliant on drugs or alcohol to feel better. Many don’t realize these are major contributing factors, but with the help of Christian drug therapy programs and God’s love, you can find lasting sobriety.