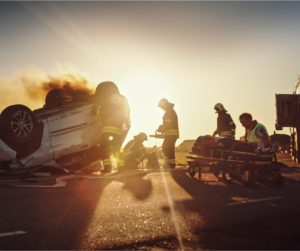 This article was written and published by The Fix

Though first responders are trained to work efficiently under the most challenging conditions, the constant exposure to life-threatening or traumatizing events eventually takes a toll.

The tumultuous events of the last year – political unrest, the coronavirus, and even the 20th anniversary of the terrorist attacks on September 11, 2001 – have put our first responders and public health workers in sharp focus. Federal, state, and local law enforcement, as well as firefighters, and emergency medical services (EMS) face extraordinary challenges on a daily basis: they are regularly the first on the scene during or after a crisis, and the first to offer support and protection to the injured, survivors, and onlookers. Though first responders are trained to work efficiently under the most challenging conditions, the constant exposure to life-threatening or traumatizing events will eventually take its toll.

A 2018 report from the Substance Abuse and Mental Health Services Administration (SAMHSA) noted that an estimate 30 percent of first responders develop mental health conditions, including depression and posttraumatic stress disorder (PTSD). For civilians, the rate is 20 percent. The report cited another study that found that the suicide rate among law enforcement is an estimated 125 to 300 police officers per year. The suicide rate among firefighter and EMS is equally troubling: a study of more than 1,000 current and retired fire personnel found that 15.5 percent attempted suicide (the civilian rate is 4.6), while another report found that 6.6 percent of EMS professionals reported attempting suicide (the report’s civilian rate was 0.5 percent).

Substance abuse, including alcohol and narcotics use, can also be high among career first responders. Fifty percent of male firefighters and 39.5 percent of female firefighters reported heavy or binge alcohol drinking in a single month. A study looking into alcohol use among police officers following the events of Hurricane Katrina in 2005 found a “significant association” between relief efforts for that natural disaster and hazardous alcohol drinking. Another study of police officers after Katrina found that their average number of drinks per day after the hurricane increased from two to seven per day.

First responders also face a host of factors that impact them in ways that differ from how the general population experiences traumatic events. Additionally, they face collateral behavioral health damage before, during, and after disasters. First responders may have their hands full with mental or physical issues before they arrive at a traumatic scene; according to the SAMHSA report, these may include on-the-job problems, such as inadequate training, excessive expectations from superiors, issues of favoritism, fatigue, and lack of time off. When combined with issues outside of the workplace – depression, anxiety, physical health problems, family problems, personal loss – and those particular to their line of work, such as regular exposure to death and severe injuries, all contributed to increases in PTSD, substance issue problems, anxiety, and depression.

So how can first responders gain the support they need in the face of such challenges? The SAMHSA report had a number of suggestions: leaders can assist by developing clear strategies for dealing with disasters that include all team members and foster cooperation within the organization. They can also inform team members that the situation they are facing has the potential to generate stress, and encourage them to speak candidly about their ability to perform under such conditions. They can also take notice of team members that appear to be fatigued or suffering from psychological issues, and make plans for all team members to take part in self-care during the actual disaster situation.

Unfortunately, many first responders feel that asking for help is not part of their emotional makeup. In an interview with the Reno, Nevada-based television station KOLO, James Brumfield, president of the Truckee Meadows Firefighter Foundation, underscored the reluctance that many first responders feel in regard to their emotions. “By nature, we want to be there to help people,” he noted. “And we’re going to be the last to speak up when something is bothering us.”

For clinician Steve Nicholas, who is embedded with Truckee Meadows Fire and Rescue, that belief is not only outdated, but also dangerous. “The [idea] of the warrior never hurts, well, that’s silly,” he said. Problems arise for many first responders when they leave the disaster situation. “It’s when they go home,” said Nicholas. “And they’re not necessarily in that mindset – the stack of three cereal bowls in the sink will be the tip-over moment.”

Brumfield agreed. “It’s the quiet, self-reflection time where it seems like some of the darkest moments get re-lived again.”

When those darkest moments prove too overwhelming for first responders, there are mental health options that are available to them that specifically focus on their needs. Wish Recovery – luxury rehab & detox, a private dual diagnosis residential detox and alcohol/drug treatment center located in Northridge, California, has addiction treatments and therapies tailored specifically to first responders, who recover alongside members of their peer group.

The facility’s team includes both current and former first responders with extensive, first-hand experience with and clinical knowledge of the mental, emotional and physical stressors faced by first responders on the job. Through group, family, and individual therapies, clients learn new, healthy ways to cope with depression, anxiety, grief, fear and work-related trauma. They also have access to an array of modalities, including cognitive behavioral therapy (CBT), dialectical behavior therapy (DBT), experiential therapy, EMDR and trauma-based therapy, and relapse-prevention therapy.