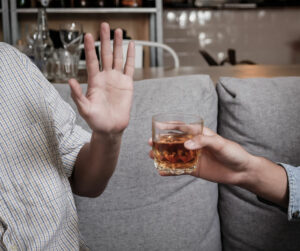 Over 85% of adults in the United States drink alcohol, and for the less than 15% of us who don’t, refusing alcohol in social situations can feel sometimes make us feel left out or like the oddball of the group.1 This is especially true for people who used to drink in social settings or are now recovering from an alcohol use disorder. However, there are plenty of ways you can spend time with friends and have fun without alcohol. Below is more on the dangers of social drinking and some tips on how to not drink in social situations.

What Is Social Drinking?

Alcohol is a major part of many cultures, especially American culture. Whenever people think of a party or get-together, they most likely think of alcohol. When people plan parties or beach days with friends, they stock up on beer. Alcohol is a popular way to socialize, relax, and even celebrate special occasions for many people in many countries.

While occasional drinking or even drinking alcohol a few times a week doesn’t mean you’ll become addicted or develop a serious habit, this ingrained cultural attitude toward alcohol has proven harmful for many. As a result, there’s no clarity on what social drinkers are and the dangers of social drinking.

Social drinking is exactly what it sounds like: the act of drinking alcohol in social settings. Social situations include a gathering with friends or family, a big party, and going to a nightclub, restaurant, or bar. The most common reasons why people drink are mainly social and include relaxing, fitting in, and celebrating something.

However, drinking socially can get out of control for someone who is frequently social and spends a lot of their time out and about with friends. It can also be a problem if someone relies on alcohol to fit in or to feel comfortable in social situations. Using alcohol as a reward, a crutch to alleviate stress, or to feel comfortable spending time with others are all early signs of alcoholism.

How to Be Social Without Alcohol

As we mentioned, social drinking is so common that it can be difficult to draw the line between social drinking and alcoholism. If you’re someone who’s recovering from an alcohol use disorder or you simply want to cut down on your alcohol consumption, below are some tips on how to socialize when you don’t drink that can help.

Be the Designated Driver

Being the designated driver automatically gets you out of drinking. You can even say that you have to be up early for work the next day or something similar if you feel it’s necessary. However, you might still have people who will tell you that one or two drinks are okay even if you’re not drinking, but don’t let them pressure you. This is extremely dangerous, and there are both legal and safety reasons for not drinking and driving.

Always Have a Non-Alcoholic Beverage in Your Hand

If you always appear to have a drink in your hand, then no one will offer one to you. You don’t actually have to drink it, or you can just pour yourself some soda or water into a red cup, and no one would notice. If you’re always holding a drink, it’s easier to say, “No thanks, I’ve got a drink already.”

Make an Effort to Socialize

Drinking is often an icebreaker for socializing. Alcohol also has a relaxing effect on the mind, which can make socializing for some people easier, as well. However, if you’re ready to stop social drinking, then you have to learn how to socialize without the alcohol crutch. Asking simple questions is a great way to break the ice. Compliments are also great icebreakers.

Know When to Head Out

If you feel as if the situation is getting a little out of control or you’re being pressured to drink, then make your exit. Don’t be afraid to leave a situation that makes you feel uncomfortable. Especially if you’re in addiction recovery, sticking around to not seem “rude” or like a “party pooper” is not worth it.

It’s easy to avoid drinking too much in social situations when you have control over what’s being served at the event. You can host an alcohol-free party with other types of fun drinks or mocktails, or you can host an event that doesn’t normally include alcohol, such as rock climbing, going to a museum, go-karting, or others.

This also includes work events. You can suggest an alcohol-free event as an alternative to standing around drinking and talking. There could be some fun games involved or competitions that aren’t just fun but also serve as team-building exercises.

Say No Without Feeling Embarrassed

While all of these tips for quitting social drinking are helpful, this is a reminder to say no when you need to and never feel embarrassed or ashamed for it. If you’re at an event and someone offers you a drink, you should always be able to just say no. If you’re in a situation where friends are pressuring you to drink, then they’re not your friends. Don’t let anyone ever feel like you have to do something you don’t want to do.

Learning how not to drink in social situations can be tough at first, especially if you were the person who always initiated it. However, you should be proud that you want to make this change or stick with your recovery.