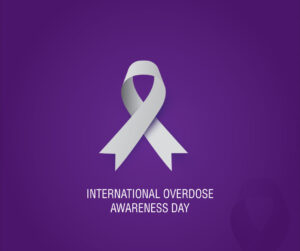 This article was written by Nick Goldberg and published by RCA

International Overdose Awareness Day is a global event held every year on August 31st. The largest campaign of its kind, its purpose is to help prevent drug overdoses by raising awareness, reducing stigma and recognizing the grief of those who have lost loved ones to overdose. Begun in Australia in 2001, it has been run by the Penington Institute since 2012, and is now observed in over 40 countries worldwide. As the overdose death toll has risen greatly since it started, and as the opioid epidemic in particular has become one of the world’s public health crises, the hope each year is to involve the greatest number of people internationally in its observance.

Through this combined effort, International Overdose Awareness Day educates individuals, institutions and communities, promoting evidence-based practices around overdose prevention and public policy. It also creates a shared space for public mourning without embarrassment, shame or guilt. A further aim is to send a message to those who have suffered or continued to suffer from substance use disorder that they are valued and supported.

To get involved, you can participate in any number of events sponsored by governments and various non-governmental community groups and institutions, or hold your own event with this toolkit as a guide. You could also post a tribute to someone who has died from overdose, or express solidarity on social media using the hashtags #OverdoseAware and #EndOverdose. Additionally, you can show support by purchasing and wearing a badge, wristband or lanyard in honor of the day.

The Reality of the Opioid Epidemic

As important as International Overdose Awareness Day is at any given time in the crisis, it bears an added grave resonance over the last two years. Reported widely by the New York Times and other media outlets, opioid overdose deaths during the COVID-19 pandemic years reached new tragic heights.

According to CDC data, over 87,000 Americans died of drug overdoses during the 12-month period between September 2020-1, exceeding the death toll of any year since the opioid epidemic began in the 1990s. Amid the lockdowns, unemployment, isolation and uncertainty, overdose numbers saw a sharp rise in spring of 2020—a tragic turnaround from the first drop seen in decades during 2018. Making matters worse, many treatment centers closed or curtailed their services, in addition to reduction in neighborhood support centers providing clean syringes and naloxone.

The greatest culprit is fentanyl, fatal not just to those who use it on its own, but also to those who unknowingly take it as it is increasingly added to other drugs, particularly stimulants like cocaine and methamphetamine, but also in counterfeit opioid and benzo pills. Overdose deaths, overwhelming caused by fentanyl—whether taken knowingly or not—became the number one cause of death in the U.S. among 18-45 year-olds. Rising 15% over the previous year, in 2021 overdose deaths overall amounted tragically to a death every five minutes on average. As the conditions of the ongoing pandemic have compounded the already critical opioid epidemic, then, we approach observance of International Overdose Awareness Day with increased urgency.

How RCA Treats Addiction for a Lifetime of Recovery

At Recovery Centers of America, we have witnessed the ravages of the opioid epidemic on individuals, families and communities firsthand, and we know the pain of addiction inside and out. To counteract their devastating effects, we have assembled an array of proven clinical programs and support services to do everything within our power to combat the crisis. We offer:

In this joint endeavor, we can rally together against the epidemic in the pursuit of lives free from the burden of addiction.