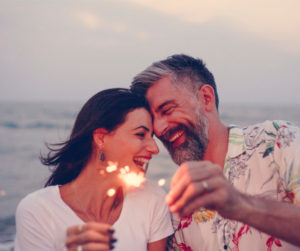 Sparks do not burst from a vacuum, they are incandescent blasts from intense heat and friction.  The famous Christmas Carol ‘Feliz Navidad’ was back in the headlines recently celebrating its 50th anniversary.  Most stories talked about the song-writing process of its creator, José Feliciano, as one of magical ease, a spark of hope and inspiration.  The magical spark storyline fits, given that ‘Feliz Navidad’ contains only 19 words, was written in ten minutes, and recorded in one take.  What is missed in the magical story of Feliz Navidad’s inception is the backdrop of toil, perseverance, sacrifice, and hardship in the life of the songwriter that constituted the rich soil from which the Christmas Carol gem burst forth.

Feliciano was born in Puerto Rico in 1945.  He was blind from birth and began playing music at age three with his Uncle, who played the cuatro while Feliciano accompanied him on a tin cracker can.  At age five, Feliciano moved to New York.  Life was likely not always smooth-sailing for a blind boy growing up in Spanish Harlem.  Feliciano devoted himself to music, played clubs and ‘passed the hat’ for donations, and after over two decades of focused, devoted work on his craft, the magical moment of inspiration came that resulted in a 10-minute flurry of creativity that spawned one of the 25 most-played Christmas songs of all-time.  What came together in 10-minutes took nearly 25 years of discipline and dedication.

Tempting though it may be to home in on the abundance of adversity many experienced in the past year, balanced thinking with a conscious effort to consider sources of joy and hope for the holidays will be more essential than ever if one wishes to benefit from the restorative respite the holiday season is supposed to offer.  Buried in the rubble of a global pandemic, controversial societal shut-downs, soaring addiction rates, exceptionally divisive elections, and an existential uncertainty unfamiliar in recent decades, keen observers may still detect the faint shimmering of a few proverbial hope-diamonds in the rough.

While it is quite likely too soon to even consider what ‘silver linings’ will become clear from distant hindsight into 2020, history does suggest that some unforeseen, unanticipated benefits are likely to arise from the costs of the past year.  Much like the backdrop of Feliciano’s perseverance through the inevitable struggle of growing up blind and trying to make it in music, as the adversity of 2020 begins its welcomed fade into the background of our lives sparks of hope for the holidays and creative innovation are starting to appear.  Major advancements in mental health and addiction treatment are on the horizon.  A societal re-opening is likely in the coming year.  Video conferencing is fully established, resulting in more freedom to work from home.  Scientists continue to advance cutting edge treatments with psychedelics and potential medical treatments that harness the latest technology and neurobiological knowledge.

If things go according to plan, legal psilocybin treatment will be available to US citizens willing and able to travel to the beautiful state of Oregon by 2023.  Scientists recently found evidence suggesting that boosting an anti-inflammatory immune protein called Interleukin (IL-10) in the amygdala of mice with chronic alcohol use significantly reduced anxiety and motivation to drink.  Whether IL-10 boosts will produce similar, positive effects in humans remains to be seen, but such possibilities are certainly glimmers of hope in an addiction treatment field with a dismal record of efficacy.

Although limitations on our sacred traditions are stifling the spirit of the holiday season for some this year, we would be remiss to not also shift our focus to the sparks of hope for the holidays illuminating hints of good news ahead.  We don’t know when our 10-minute flurry of creative genius that changes everything will come.  We do know that a discerning eye sees not only the incandescence of the spark, but also the backdrop of intense struggle fertilizing life’s most treasured and magical moments.