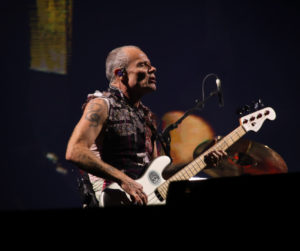 This article is by Ed Welch and published by CCEF

Listen to Scripture, listen to people. This is how we grow in our care and counsel. And grow we must if we want to help someone who has stories beneath stories. Most addicts do.

Flea is the bass player for the Red Hot Chili Peppers. He is a sensitive soul whose father left when he was six. The men who entered that void surrounded him with violence and alcoholism that turned him to drugs and the streets by eleven. Now sober and in his late 50’s, he reflects on those early years. “I stopped doing drugs and doing alcohol when I was about 30. Then I started feeling everything, and sometimes it was a river of pain.”

Sin and misery make our lives quite complicated. For every person’s story, there seems to be a story beneath that and another beneath that.[1] Flea’s cover story was the rock star who fulfilled the mandate of drugs and other excesses that flirt with death. Beneath that was a musician who could clash with bandmates over musical direction. Beneath that was a person who loved his friends and lost many of them to overdoses, among them his mentor and bandmate Hillel Slovak. And beneath that was an early life of gross victimization, cruelty, and abandonment, which he struggled, with some success, to forgive once he entered his 40’s. Together, these were his unending river of pain.

Given this complexity, how can we ever help? Our counsel might speak to one story but miss a more important one. How can we know someone well enough to say anything? Biblical counselors have erred by assuming that one story is the only story. To keep our errors to a minimum, we work to listen more and say less. Good advice certainly—but there is more we can say.

Assume, especially with addictions, that sin and misery have merged. Given Flea’s story, and how his words speak for thousands of addicts, we can be sure that some people enter addiction, in part, because it temporarily suppresses the misery of life. Added to these past miseries are those that accumulate because of the addiction itself, with its broken relationships, joblessness, and shame. Sobriety, then, must have the resources to bear up under unbearable pain, and long-term addicts do not have these resources. For helpers, this enlarges our patience and sends us into a rebuilding process that includes specific ways to respond to a person’s pain.[2]

Addicts can begin a new path now, right where they are. Complexity, rightly understood, yields to simplicity. The jumbled and muddled life that is an addict’s past, which makes the future seem intolerable, gives way to today. We examine and speak of our pasts with the goal that we hear the words of Christ in it. But every day, we also put aside both past and future and consider how to live well, right now. “Ponder the path of your feet” (Pro 4:26). “Today, if you hear his voice, do not harden your hearts” (Heb 3:15). The path of addiction certainly has momentum that threatens to carry people away, but the path of wisdom is always near. Addicts can find it now, right where they are. It is hard, but simple: stop, consider what wise people have said, consider what is right and good, and act; make a wise choice.

The important story is the one that is important to the person. If we walk with someone who has known addiction, we always return to today, yet we also identify the most critical themes or stories. As a general rule, the important story is the one that seems most important and pressing to the struggling person, and its discovery is a joint effort, something you do together. In Flea’s case, you would most likely unravel the details of cruelty and neglect in his early years. No matter the story, whether it is one of lust and idolatry or of victimization and pain, every story finds its hope and rest in the person of Jesus. As all Scripture and human history find their meaning and hope in Jesus Christ, so our own stories are resolved in him, not in a way that he answers all of our questions, but in a way that he comforts the rejected, brings justice to the oppressed, and forgives those whose sins seem beyond forgiveness.

Expect to be overwhelmed when you hear an addict’s story. Expect “a river of pain” that will certainly command your attention. And expect every important story to be one where Jesus speaks words that might be the first words of blessing and hope an addict ever heard.