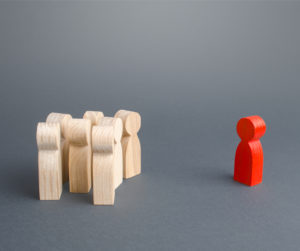 Addiction can roil relationships with abuse, betrayal, and domestic violence, placing great stress on a family. Typically, parents and siblings who try to help or manage a family member’s addiction find themselves sapped of emotional energy and drained of financial resources. My survey shows as many as 10 percent of respondents suspect that a sibling is hiding an addiction.

I wonder: Does the addiction produce family problems, or do a dysfunctional family’s issues result in addiction? It sounds like a chicken‑and‑egg question. I suppose at this moment the sequence of events doesn’t really matter to me. What I need is guidance on helping my brother conquer his alcoholism.

Typically, when it comes to addiction, many experts advise using “tough love” to change behavior—promoting someone’s welfare by enforcing certain constraints on them or requiring them to take responsibility for their actions. The family uses relationships as leverage, threatening to expel the member who is addicted. The message of this model is explicit: “If you don’t shape up, we will cut you off.”

Tough love relies on solid, established relationships; otherwise, the family member at risk may feel he or she has nothing to lose. My relationship with Scott is tenuous, anything but solid. He has lived without me for decades, and if I try tough love, he could easily revert to our former state of estrangement.

Addiction is a complex phenomenon involving physiological, sociological, and psychological variables, and each user reflects some combination of these factors. In Scott’s case, because alcoholism doesn’t run in our family, I don’t think he has a biological predisposition to drink. I suspect my brother’s drinking results from other origins.

Current research identifies unexpected influences that also may be at the root of addictive behavior, including emotional trauma, a hostile environment, and a lack of sufficient emotional connections. Addictive behavior may be closely tied to isolation and estrangement. Human beings have a natural and innate need to bond with others and belong to a social circle. When trauma disturbs the ability to attach and connect, a victim often seeks relief from pain through drugs, gambling, pornography, or some other vice.

Canadian psychologist Dr. Bruce Alexander conducted a controversial study in the 1970s and 1980s that challenged earlier conclusions on the fundamental nature of addiction. Users, his research suggests, may be trying to address the absence of connection in their lives by drinking and/or using drugs. Working with rats, he found that isolated animals had nothing better to do than use drugs; rats placed in a more engaging environment avoided drug use.

Similar results emerged when veterans of the war in Vietnam returned home. Some 20 percent of American troops were using heroin while in Vietnam, and psychologists feared that hundreds of thousands of soldiers would resume their lives in the United States as junkies. However, a study in the Archives of General Psychiatry reported that 95 percent simply stopped using, without rehab or agonizing withdrawal, when they returned home.

These studies indicate that addiction is not just about brain chemistry. The environment in which the user lives is a factor. Addiction may, in part, be an adaptation to a lonely, disconnected, or dangerous life. Re‑ markably, a tense relationship with a sister or brother in adolescence may contribute to substance abuse. A 2012 study reported in the Journal of Marriage and Family entitled “Sibling Relationships and Influences in Childhood and Adolescence” found that tense sibling relationships make people more likely to use substances and to be depressed and anxious as teenagers.

Those who grow up in homes where loving care is inconsistent, unstable, or absent do not develop the crucial neural wiring for emotional resilience, according to Dr. Gabor Maté, author of In the Realm of Hungry Ghosts, who is an expert in childhood development and trauma and has conducted extensive research in a medical practice for the underserved in downtown Vancouver. Children who are not consistently loved in their young lives often develop a sense that the world is an unsafe place and that people cannot be trusted. Maté suggests that emotional trauma and loss may lie at the core of addiction.

A loving family fosters resilience in children, immunizing them from whatever challenges the world may bring. Dr. Maté has found high rates of childhood trauma among the addicts with whom he works, leading him to conclude that emotional damage in childhood may drive some people to use drugs to correct their dysregulated brain waves. “When you don’t have love and connection in your life when you are very, very young,” he explains, “then those important brain circuits just don’t develop properly. And under conditions of abuse, things just don’t develop properly and their brains then are susceptible then when they do the drugs.” He explains that drugs make these people with dysregulated brain waves feel normal, and even loved. “As one patient said to me,” he says, “when she did heroin for the first time, ‘it felt like a warm soft hug, just like a mother hugging a baby.’”

Dr. Maté defines addiction broadly, having seen a wide variety of addicted behaviors among his patients. Substance abuse and pornography, for example, are widely accepted as addictions. For people damaged in childhood, he suggests that shopping, chronic overeating or dieting, incessantly checking the cell phone, amassing wealth or power or ultramarathon medals are ways of coping with pain.

In a TED Talk, Dr. Maté, who was born to Jewish parents in Budapest just before the Germans occupied Hungary, identifies his own childhood traumas as a source of his addiction: spending thousands of dollars on a collection of classical CDs. He admits to having ignored his family—even neglecting patients in labor—when preoccupied with buying music. His obsessions with work and music, which he characterizes as addictions, have affected his children. “My kids get the same message that they’re not wanted,” he explains. “We pass on the trauma and we pass on the suffering, unconsciously, from one generation to the next. There are many, many ways to fill this emptiness . . . but the emptiness always goes back to what we didn’t get when we were very small.”

That statement hits home. Though my brother and I didn’t live as Jews in a Nazi‑occupied country, we derivatively experienced the pain our mother suffered after her expulsion from Germany and the murder of her parents. Our mother’s childhood traumas resulted in her depression and absorption in the past and inhibited her ability to nurture her children.

Still, in the end, it’s impossible to determine precisely the source of an addiction problem. Maybe it doesn’t matter anyway. The real question is, What can I do about it?