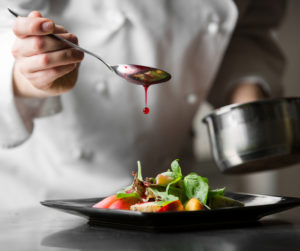 A bottle of wine. A case of beer. Multiple shots of whiskey or vodka. When an individual is struggling with an alcohol use disorder (AUD) there seems to be no limitations on how much they consume in one sitting. And when mixing drugs with alcohol misuse, this can be a dangerous, and sometimes deadly, combination. The struggle is very real. And if an individual realizes their own alcohol addiction, quitting on one’s own is not advised.

When battling an AUD, individuals may need to properly detox under a licensed physician in order for the withdrawal process to be done safely. Quitting “cold turkey” can be lethal.

Joy Sutton, host of American Addiction Center’s (AAC) Recovery Stories from the Pandemic series, had the opportunity to interview Celebrity Chef Bryan-David Scott about his own personal struggles with alcohol. He recognized his challenges with drinking and when he was ready, he contacted Desert Hope Treatment Center, an AAC facility, in order to receive the help that he knew he needed.

Hearing that a celebrity has struggled, worked through the challenges, and is living a life of long-term sobriety is both inspiring and encouraging. You can listen to this episode where Chef Bryan-David discusses his experience.

If you’re struggling with an alcohol addiction, you’re not alone because help is within reach. Not only is AAC the parent company to Desert Hope, but it is a nationwide leader in addiction treatment that provides care in a safe and supportive environment. If you’re battling with alcohol misuse, please reach out for help.

Celebrity Chef Bryan-David Scott is a success. He gets to prepare delicious and exquisite cuisines for celebrities, the Oscars, as well as for the Grammy Awards.

“I would find myself backstage… different concerts. I was invited to be part of the Rock & Roll Chef ® and a lot of circles because of the different rockers and different pop artists that I know.”

When asked about his career, Chef said, “There’s no doubt. Being in the limelight is a glorious life. There’s no running from it. Or hiding. It’s awesome. But what people don’t understand are the pressures that go with that.”

As with all good opportunities and experiences, they come with a lot of work and sweat equity.

“It’s not just the pressure to perform. It’s sometimes traveling all night to get someplace to be there so that you’re ready to rock. A 12-hour day is a part-time day. When you’re out on tour, by the time you hit the camera, many times it’s 25, 26 hours a day when we wrap,” he continued.

Chef makes the point that the general public doesn’t see all of the work and “ingredients” that go into materializing the magic that appears on television. All of the traveling by car. By plane. Being away from his wife and children. There is a lot of work and sacrifice of time that goes into what he does.

Mix the pressures, the overwhelming commitment to perform, and Chef’s love for the taste of wine, whiskey, and beer, and for some individuals, there is a recipe for an addiction to alcohol.

Chef also shares how he used cocaine when he wasn’t sober because, as he puts it, “…nothing will give you a bump when you need that energy like a shot of cocaine.” He goes on to say, “And that would get me through the night. But then… I’d want to come down. And so, I would drink heavier and heavier… your life is just this constant up and down.”

In other words, he was always chasing a feeling until…

“… I called my wife one night. I’ll never forget it. I was in a hotel in Southern California. And I admitted to her I’d become an addict.”