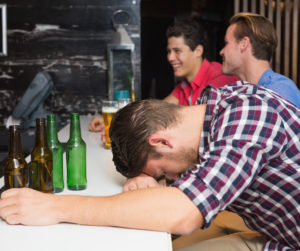 This article was written and published by The Fix

I knew my life was off track and that I drank a bit too much, but I didn’t put the two things together.

In the same way that I’m 5’8″ and I have blue eyes, both things were true but not causal.

I knew my life was off track. My career was stalled. My marriage ended. And the caliber of the guys I dated was declining faster than I could believe.

And I definitely drank. More about that below.

Are these true for you? If so, your drinking is more of a problem in your life than you think.

But not every time.

That’s what gets confusing.

Once I started drinking, I simply didn’t have an “off” switch. As soon as I started feeling the buzz, I wanted more. MORE WINE was all I could think about. I’d keep my eye on the waiter who was pouring the wine. I’d know I’d stop at the bar before heading up to my hotel room. And I only bought a limited quantity of booze so I wouldn’t be ABLE to keep going after a certain point.

If I HAD to stop, I was not happy. Why drink if you’re not going to get drunk, am I right?

Once you start are you neutral about stopping? Or when you stop are you white-knuckling it?

2. You do things when drinking that you would never do sober.

Ugh. Where to start?

Endangering my safety when driving after a few glasses of wine.

Engaging with men who were wildly inappropriate.

Falling down on a dance floor when dancing with a client. (I still cringe over this one.)

3. Your emotions are all over the place the day after you drink.

I wake up feeling like crap. Depressed. Then anxious as I try to reconstruct the night before. Then remorseful and humiliated. Then begging someone to forgive me.

Pretending it was all a big joke. That I’m fine. That I MEANT to be that way.

And of course, I needed to take the edge off of that roller coaster by the time the workday was done.

And not in the cute, Brittany Spears pop-song way.

One of my sober friends told me that the first thought she had every day was “Fuck!”

Sets up a certain kind of day, doesn’t it?

5. You end up drinking when you promised yourself you wouldn’t.

This was the final straw for me.

I threw myself a super-fancy birthday party that absolutely could not afford. I had friends in from all over. So I promised myself I would drink Diet Coke.

Wouldn’t you know it? Someone offered me a drink one too many times (damn them, anyway!), and I ended up not remembering the rest of the evening.

I had experienced the phenomenon of waking up saying “never again.” Only to be drinking by 5 pm the same day. I believed that I had changed my mind.

But this experience landed with me differently.

Probably because it was so important to me to be present with my friends. And because the time of saying “never again” and being drunk was so short.

It was enough for me to be done.