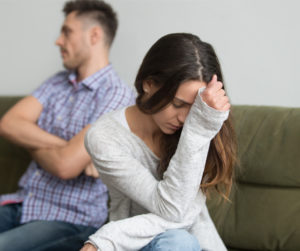 This article was written by Deni Carise and published by RCA

Marriage can be a rollercoaster of highs and lows, but what happens when those highs and lows are chemically induced? Relationships require work and when one partner turns to substances instead of their spouse, the end result can be divorce.

Akin to the chicken and the egg dilemma, the notion that people with substance use disorder (SUD) have higher rates of divorce could be attributed to their SUD causing the divorce or it could be an effect of the divorce. That is, one’s addiction could create an environment that is toxic to a marriage, or it could be that an individual turns to substances as a means to cope after their marriage ends.

Studies have shown that there is a clear correlation that exists, but it is unclear whether divorce more often increases the risk for onset of SUD or vice versa. Substance abuse was reported as a major contributing factor to divorce by 35% of participants in one study. One law firm compiled massive amounts of data on divorce and reported that each liter of alcohol consumed raises the likelihood of divorce by 20%. If the average American drinks 9.4 liters of alcohol per year, as they suggest, they are 188% more likely to get divorced. Additionally, it has been shown that divorced individuals have higher rates of substance use.

There are several reasons why a husband, wife, or partner who is struggling with SUD can greatly impact a marriage. There may be a breakdown of communication between the couple that precipitates one partner turning to substances, or communication may waver because of the substance use and the disorder. Additionally, trust may become an issue if a partner is sneaking illegal substances or trying to hide their use. And there is also the high financial burden associated with the costs of addiction. Drugs and alcohol are expensive. People who often get drunk or high have difficulty holding down jobs. And arguing about money is thought to be the second leading cause of divorce.

Children add another layer to the issue. Obviously, any drug use in front of children can be detrimental to their wellness and development – and because for arguments between spouses. Additionally, children whose parents struggled with SUD are more likely to experience divorce themselves, and children of divorced parents are more likely to use drugs or alcohol than children in two-parent households.

Notably, of the individuals who indicated that there was a “final straw” involved in ending their marriages, substance abuse ranked third behind infidelity (a moral choice) and domestic violence (a crime). This aligns with surprising research that shows that 75% of couples dealing with any chronic disease end in divorce. Clearly, we need better tools for married couples to address the stress of chronic disease, addiction included.

Substance use is not a death sentence for a marriage – and it is not inevitable after a divorce. There are things couples can do to mitigate divorce stemming from one partner’s substance use. First, many couples still seek out premarital programs or groups. Educating men and women about substance abuse, how to recognize signs of a problem, how to get help, that it is a common reason for divorce, and encouraging them to address problems as early as possible could help reduce issues later. Additionally, couples’ counselors should be well-informed on this topic, as well as how to bring couples together to best support one another. The non-using spouse should be heavily involved in treatment and attend their own support groups. Education, awareness, and compassion are critical, and recovery is possible.

When divorce does happen, divorcees should seek out healthy habits like exercise or activities that make them feel good. Friendships should not revolve around partying to numb out feelings but should be supportive and reciprocal. Again, education and awareness are important to recognize signs of depression or detachment and, consequently, substance use as a means to cope.