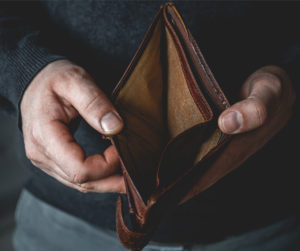 This article is by Dane O’Leary and published by rehabs.com

When you consider the cost of addiction, you probably think of all the money it takes to sustain such a habit. While it’s true that drug and alcohol addiction is incredibly expensive, there are many other costs in addition to the financial. Many times an addict won’t realize all the things they sacrifice as a direct result of their substance abuse, as was the case with me.

In light of recent statistics estimating how much money is spent on illegal drugs in the US, I felt it imperative to elaborate on the true cost of addiction; not just money, but also relationships, jobs, and countless other opportunities addicts resign as they try to alleviate the unrelenting hunger of the Addiction Monster.

In the early stages of my addiction, I was still under the (rather misguided) impression that I was still in complete control of my substance abuse. It was a fledgling habit, so there’s no way I could have lost myself to addiction so quickly, right?
For me, addiction began as a sort of warped rewards system. Okay Dane, finish this paper and that homework assignment, and then you can dive into this pile of cocaine or that bag of heroin. I thought with intoxication as my reward, I would prevent myself from shirking my responsibilities.

It wasn’t until years later that I saw what my addiction had truly been costing me.
My school attendance declined sharply. I would finish my assignments (half-assed, of course) and email them, too weak from the previous night to go to class, more concerned with my “hair of the dog” than anything else. Drug abuse was also the reason for many call-outs at my job, internship opportunities I missed because they would have conflicted with my partying, and countless dates I blew off. In short, if something or someone clashed with my rigorous schedule of getting high, then it wasn’t worth my time.

“What had once been an expense of around $200 per week had become an expense of $150 per day at the very least, or roughly $1,000 spent on opiates each week.”
Within a year, my drug use had evolved into full-blown addiction. Rather than getting high as a reward, I began needing drugs, specifically heroin and prescription pills, in order to function normally at any task. Somehow I managed to complete my degree, but the moment I no longer had the structure of school as part of my routine, I lost what little control I had and my drug use increased exponentially.

Previously I spent every spare dollar I had on drugs after rent and living expenses were paid, but now drugs were my primary expense. What had once been an expense of around $200 per week had become an expense of $150 per day at the very least, or roughly $1,000 spent on opiates each week. I’d been supplementing my job’s salary with financial aid refunds and what used to be a respectable savings account, but in no time at all I’d pitifully squandered years of careful saving. I also made up countless excuses to my parents so that they too were, albeit unknowingly, financing my addiction. (“Mom, can I have $600? I need new tires.”)

Unfortunately, the obscene amount of money I wasted on drugs is not uncommon among substance abusers. According to figures recently released by the US Office of National Drug Control Policy, between 2000 and 2010 approximately $100 billion was spent annually on cocaine (including crack cocaine), heroin, marijuana, and methamphetamine (meth) in the United States. That figure is driven largely by the addicts, or heavy users, considered by the report to be anyone who uses 21 or more days out of each month.

“At the worst stage of my addiction, which lasted about two years, I spent roughly $100,000 of my money, my parents’ money, and money I’d received or borrowed from the government…”
As I was on the verge of bottoming-out due to living such an unsustainable lifestyle for so long, my relationships were the final, and most regrettable, price I paid for my addiction. The girl I’d been dating said that, because I was so self-destructive, she didn’t feel safe around me. My best friend—with whom I’d bonded due to our shared appreciation for frequent intoxication—stabbed me in the back, divulging very personal, private things I’d told him in confidence.

For me, rock bottom looked like this: I’d devolved from an ambitious over-achiever to someone who couldn’t hold a minimum-wage job for longer than a couple months, someone who never left home unless it was to score more drugs, and someone who was totally alone having been dumped, abandoned, and otherwise given up on by everyone important to me. It takes years of hard work and determination to build yourself a decent life, but only a short time as an addict to lose every last cent, relationship, and career opportunity that you once had.

Even after detoxing and completing a rehabilitation program, it takes a long time to recover from addiction. The residual effects of being an addict can be profound and in many cases it can take years to repair the damage. At the worst stage of my addiction, which lasted about two years, I spent roughly $100,000 of my money, my parents’ money, and money I’d received or borrowed from the government that could have been used for any number of more productive things, any of which would have given me something to show for it. Likewise, there were many relationships lost and opportunities missed that cannot be replaced. The true cost of addiction—emotional, physical, financial, social—is incalculable.